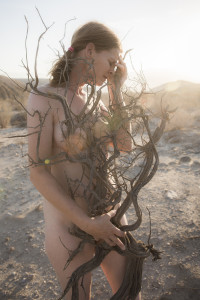 She walked into the setting sun, bare feet on cool dry sand, tan body wearing nothing but two bandaids where her nipples once had been.

She came upon the branch of a desert tree.  A limb that had fallen, had become separated from it’s tree.  Removed from the other part of itself it was no longer a tree or even part of a tree, it was now only a lost limb. On the ground it appeared to be a hand reaching out, extending itself from the earth readying to pull her down into the deep cool earth.  She reached out to the hand and pulled the limb close to her body.  Now they were two broken bodies, one limb and one woman finding solace in each other.

The sharp twigs and small branches pressed their sharpness into her skin.  Almost cruel, almost piercing the surface of her delicate skin as tears of grief for the lost part of her body rolled down her cheeks and disappeared into the soft cool sand.

Three weeks since  her breast cancer diagnosis and two weeks after surgery, Heidi was on the cancer train… that fast express that pulls you on board before you even know you have a ticket. Both afraid and brave at the same time, Heidi revealed her raw soul, her delicate beauty and her grace to the camera, surrendering to the journey that she would have to take to live.