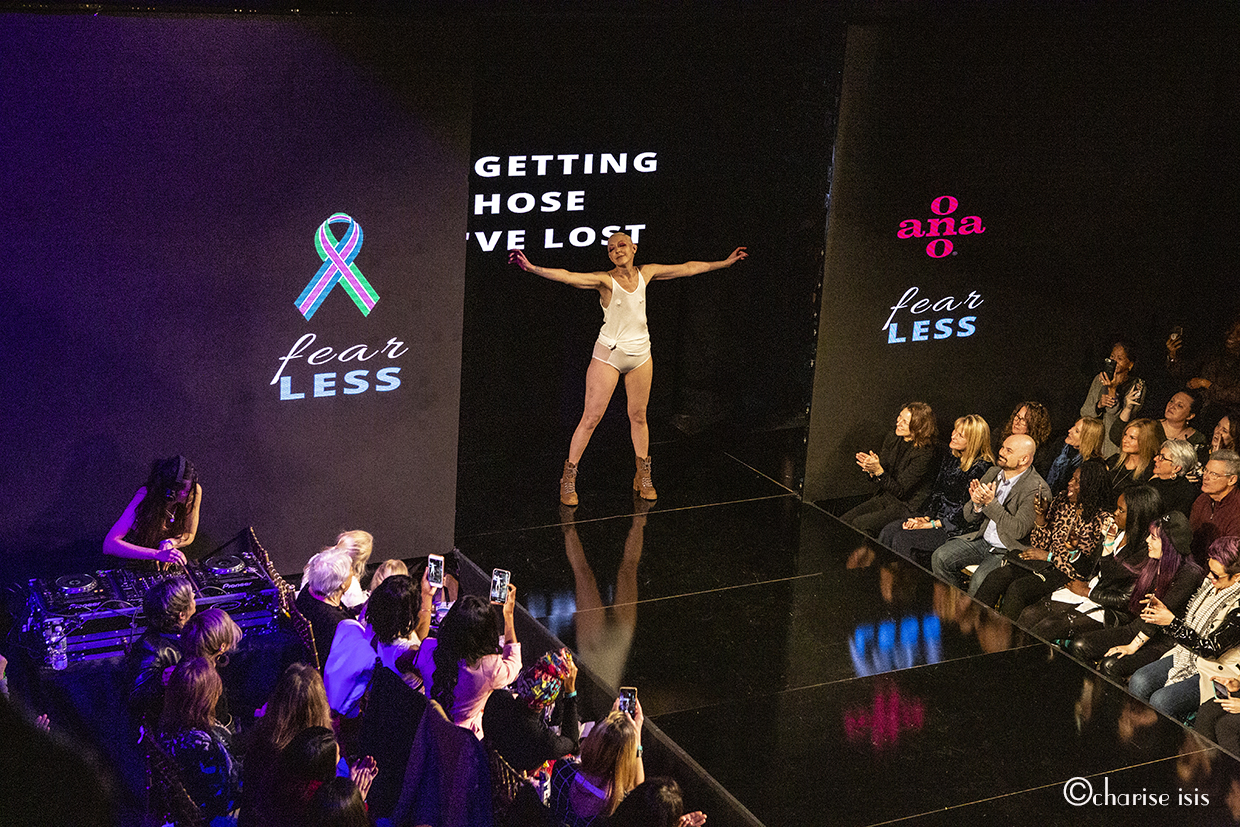 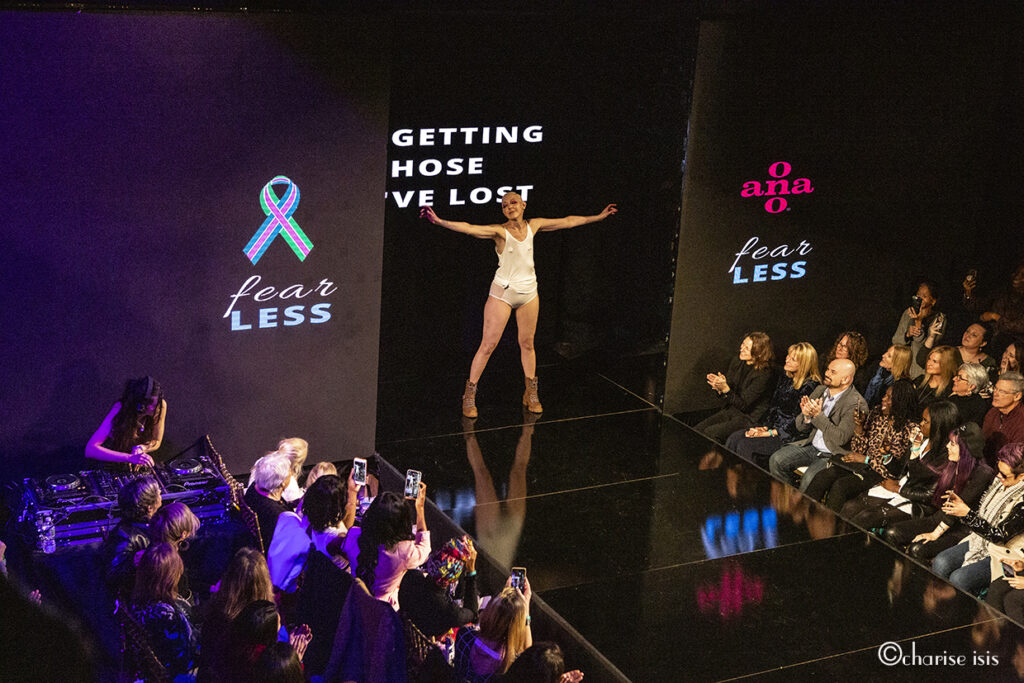 The past few years that I attended the Ana Ono show for New York Fashion week, I have grabbed a perch on the mezzanine and stuck it out there in order to get a good perspective of the show. I have no interest in photographing fashion shows, with this one exception…and it thrills me to photograph the joy, the defiance, the triumph — and the diverse array of women, all affected by breast cancer, strutting the runway, fierce as all fuck, wearing the super comfortable and yet luxurious intimates that Ana Ono creates; lingerie specifically designed for the comfort of women who have had mastectomy surgery.
This year I decided to arrive at the show early and to set up shop back stage in the hope of capturing portraits of the models with their all-glammed-up hair and makeup. But also given that I photograph the Grace Project, I figured that I could use the opportunity to allow some of the women who had traveled from afar the opportunity to share their scars for a Grace project portrait.
I imagined that backstage would look like most backstages, crumbling drywall, old paint, bare light sockets and empty glasses and throngs of busy people. I was half right, but the Angel Orensanz Foundation building, despite its peeling paint, is a beautiful old synagogue that has been repurposed for art events and has maintained much of its gorgeous old charm. Yes, even backstage… So I found myself a spot that would create the illusion of an ancient mirrored greek bathhouse, perfect for photographing my Goddesses, right?
I secured my spot which was next to the make-up room… set up my light and guarded my spot waiting waiting and waiting for the Goddesses to be ready. Apparently there was another fashion show happening right after ours, because meanwhile in the room where I was stationed throngs of glittered-up little girls wearing pink lipstick and tiaras with their stage moms were seeping into the room. Eight year olds kept plonking themselves down in my precious spot, with their tablets aglow, to engage in brightly colored video games. I had to keep shooshing them away, explaining that I was waiting for models to come along for a photoshoot.
I started talking to one proud Mom who was there with her daughter and explained to her what our show was all about and about how all the funds raised would go towards research for metastatic breast cancer. She was intrigued, and even more so when I started telling her about the Grace Project; how I have photographed the scars of over 400 women who have had mastectomy surgery. Immediately she grabbed her daughters tablet and friended me on Instagram. “This is my daughters Instagram, but I can follow you from here” she said as she nonchalantly handed back the device to the blond haired seraphim, her eight year old fingers scrolling through images of naked Goddesses and their mastectomy scars.
It was getting close to show time and I had not shot a single portrait. The room was now a muddied blend of painted and panicking women wearing Ana Ono underwear, camera people, journalists, and of course little girls with their iPads everywhere you looked… racks and racks of coats… tutus… pink and black and yellow tutus… everywhere… tutus…
I took a quick wander around the make-up room to see if I could wrangle a Goddess… but to no avail. By the time I got back to my spot I noticed another photographer had absconded with my light which she was now using against her backdrop to photograph Dana Donofree, the gorgeous and magnanimous designer of Ana Ono. And… at this point another half dozen eight-year-old girls in tutus were lining the wall of my oh-so-precious gonna-be backdrop. Sigh… I gave up and told the other photographer that she could use my light but, could she please do me a favor and ask any of the women she photographed to come back to my spot after the show. Grateful for the light, she sweetly agreed. At this point I was just going to do what I always do… shoot the show… not in the press pit… up on the mezzanine, like I always do… glad to be witness to this dazzling display. 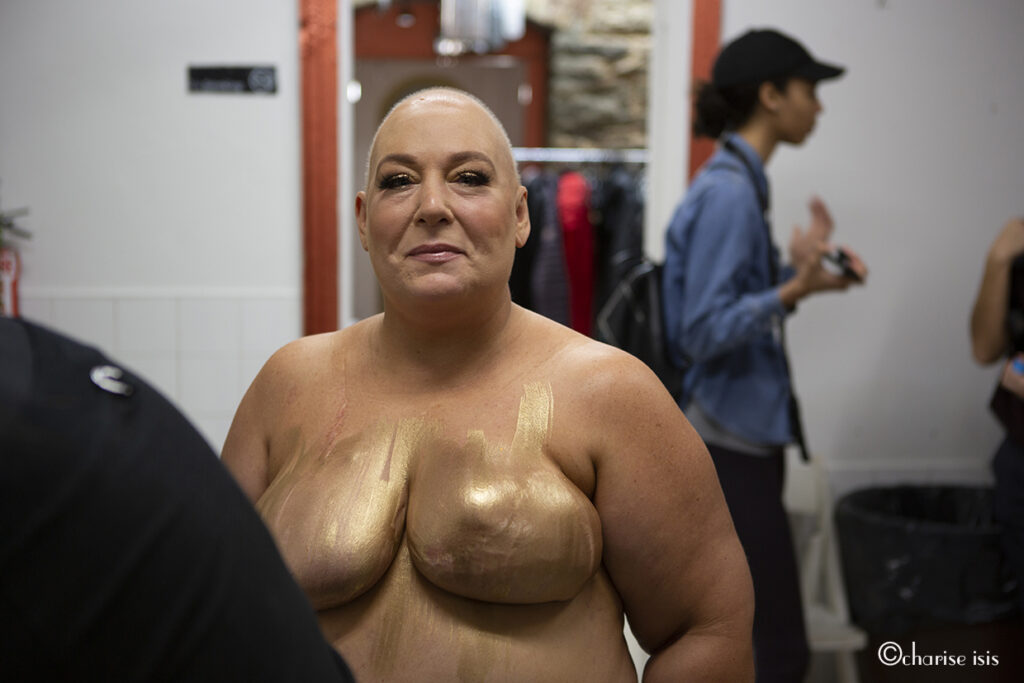 Lindsay in the make-up room.. She is pure gold!

My ever-so-patient significant other was right where I needed him to be. Guarding my spot, up on the mezzanine… and surrounded by some of my breast cancer lovelies.
I was happy to see that my friend Melissa, who recently had her toxic breast implants removed and is now living flat chested, was feeling empowered enough by the day’s events to wear a tight white top with a plunging neckline. Go Melissa!
And there, on the rail of the mezzanine, I happily perched myself, camera-ready, and so the show began.
“Fear-less” was the title and unifying theme of the show. The concept being that we are stronger together, and that together, we, the breast cancer community, can fear less, together we are stronger, and together we can raise the funds desperately needed to fund research for metastatic breast cancer. Together our voices are louder, together we can be heard. Together means an emphasis on ALL stages and all of those affected by breast cancer. The show featured women with prophylactic mastectomies as a result of a diagnosis genetic pre-disposion; those that had overcome early stage breast cancer; some women who had recurrences of breast cancer, and women living with stage iv breast cancer, fighting for their lives, those who will be in treatment for as long as treatments will keep them alive. 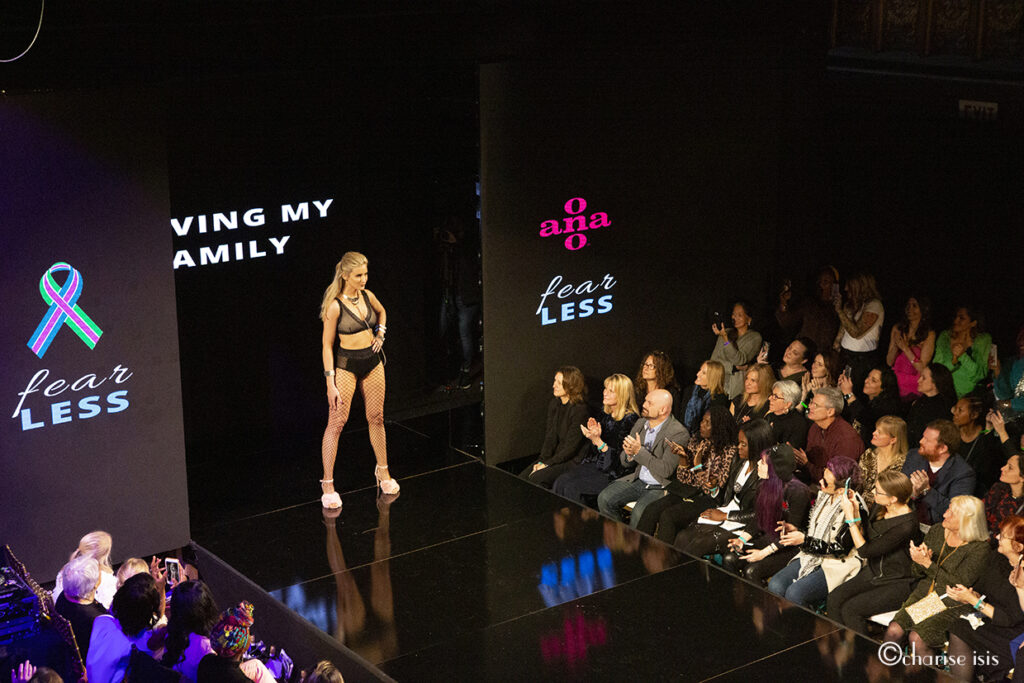 Throughout the show there were so many exquisite moments. The audience, their joy, the tears, the raucous cheers. Miss New York/USA sitting in the front row wide eyed and jaw agape as so much raw beauty paraded before her. The man whose blood sugar dropped so low that they stopped the show, called in the medics, but he refused to budge from his seat because his wife was taking the runway. Shay Sharpe’s enigmatic smile (see the pictures, it is breathtaking) … Lindsay, a lovely woman with stage IV, bald and bold and owning the runway with her beautiful full figure, wearing nothing but gold leaf on her breasts… My shy friend Karima, a quiet conservative woman of African descent, strutting her stuff and throwing off her robe and striking a pose. Rachel with her provocative jacket declaring “Pink Belongs To Me” as she flipped the bird to the audience, her blonde urchin-like children vigorously waving at her from the side of the stage like seaweed in a storm. Michelle, the grand dame of models, slithering down the stage wearing lace lingerie and a trailing a twelve foot metavivor colored cape (pink, green and teal)… and… Dana (the designer), her heart felt kiss which she blew into the heavens in honor of Champagne Joy, a woman and friend who died from metastatic breast cancer, the founder and president of #Cancerland and the woman who initiated the magic to make this all happen with the first Ana Ono runway show in 2017. 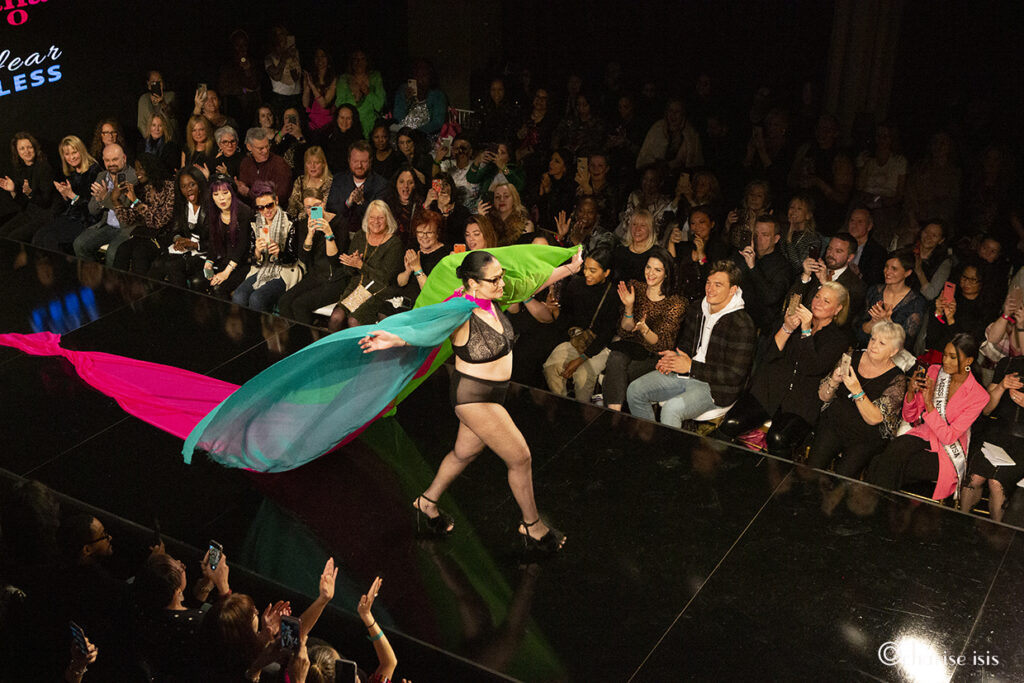 Michelle with her 12 foot Metavivor Cape! The grand dame!

When the show was over, tears of joy in my eyes, I scurried back downstairs to my spot expecting that the little girls would have cleared out to have their makeup and hair done and that I would have a line of Goddesses waiting to unrobe in front of my gorgeous Grecian backdrop. To my disappointment, my spot was filled to the brim with even more tutus. It was like tutu hell… and the tutu people had dumped all of my friends’ coats on the floor to add even more tutus… and women were panicking because they couldn’t find their coats… only tutus…
Suddenly the mom that I had talked to earlier grabbed me by the arm and pulled me to her. She looked at a woman and pointed at another mom who was standing nearby with her own angelic eight year old. “Tell her, tell this woman… tell her about the show… tell her what it was about… tell her what you told me”… So went over and I explained the whole event to this other woman, told her why there were women of all different shapes, sizes ages, breast or lack of breasts who were strutting around in their underwear, told her how beautiful and how powerful it all was… told her that TOGETHER we were trying to save lives. In an emotional moment, she then told me… that it looked like she probably has the BRCA gene, the gene that is often a major contributing factor in getting a breast cancer diagnosis.
I hugged her for what felt like a long time and with all the strength in my heart that I had absorbed watching my friends, my beautiful friends upstairs on the catwalk, many of whom are fighting for their lives… I told her “If you have the gene, let them go.. breasts are not the thing that make you beautiful… there was so much beauty on that stage upstairs. Let them go. You need to be here for your daughter”.
She looked at her daughter in a teary eyed moment and briefly her daughter looked up from her tablet before resuming play and she said… “I do… I need to be here for my daughter.”
Together we save lives… together we fear less. 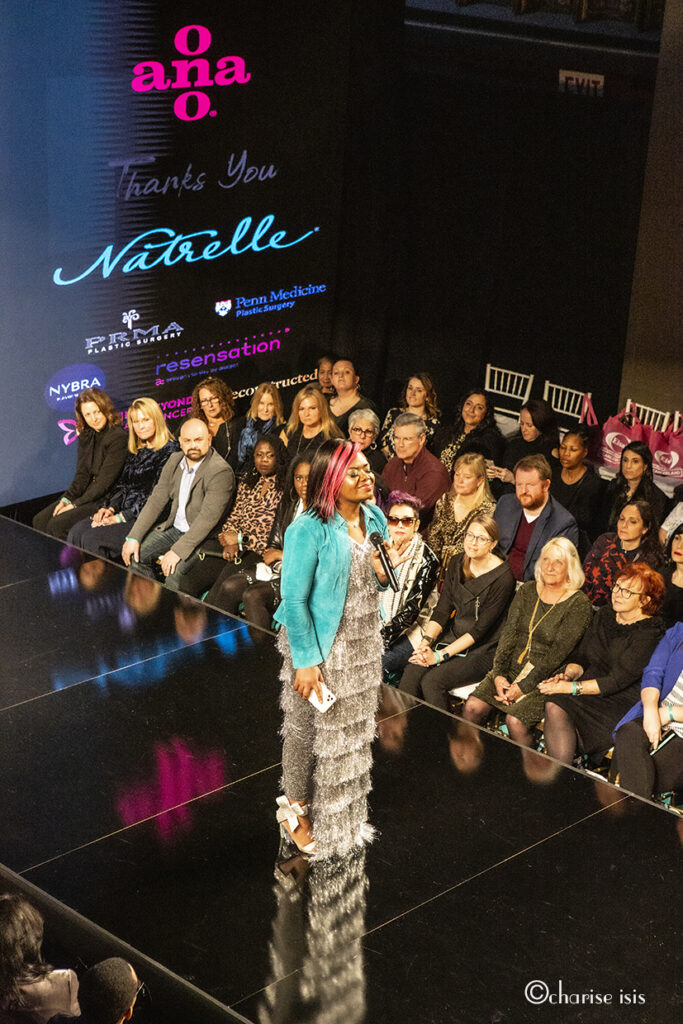 A moment of peace with Shay Sharpe. 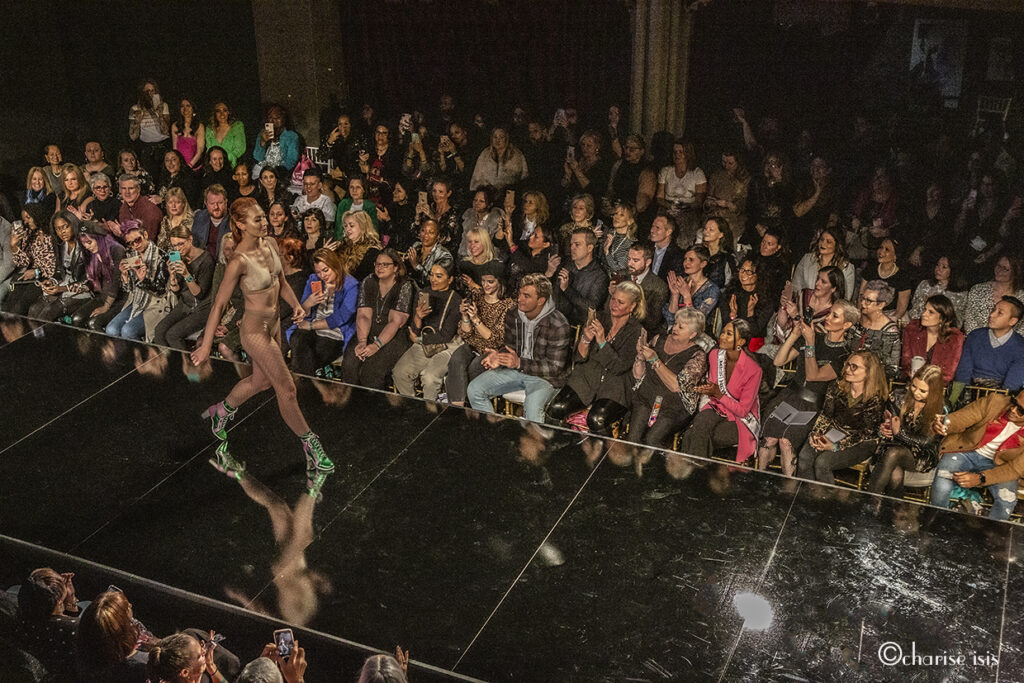 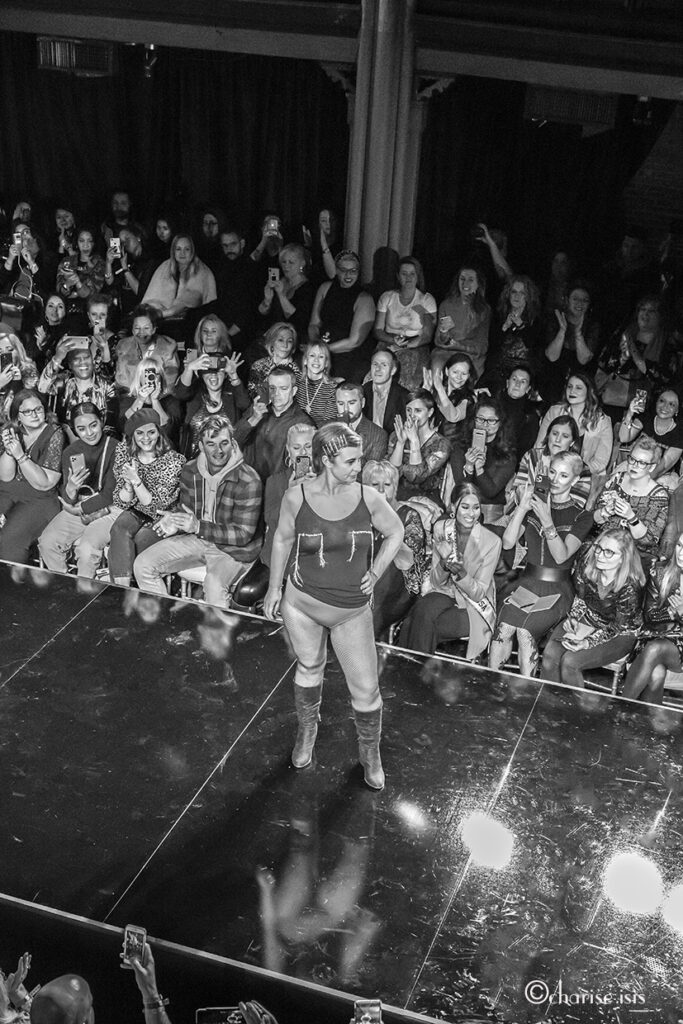 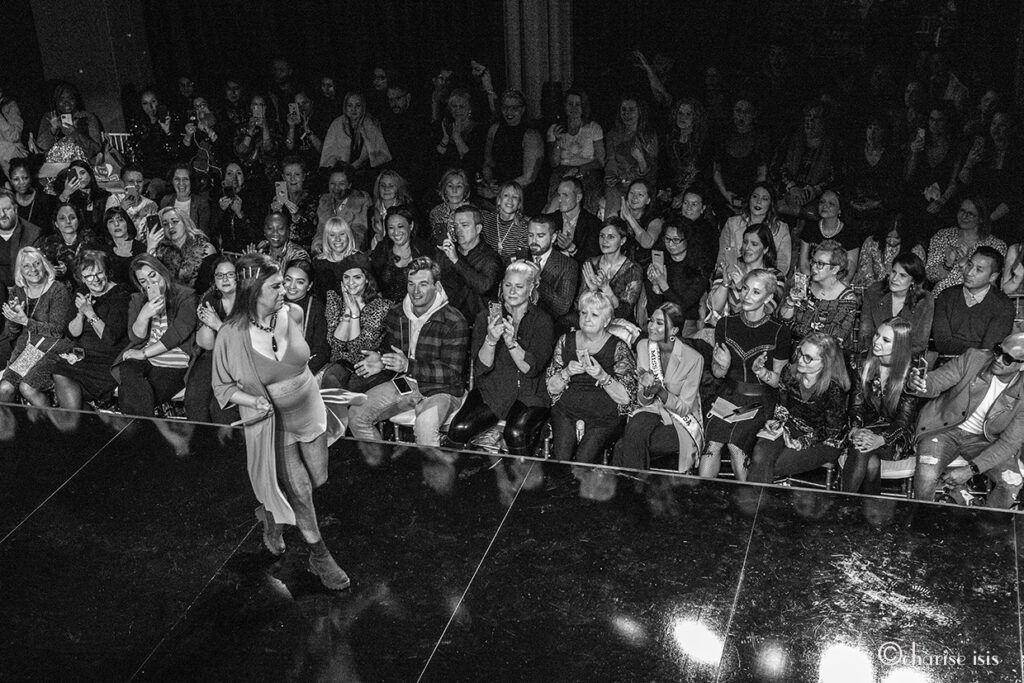 My shy friend Karima… owning it! 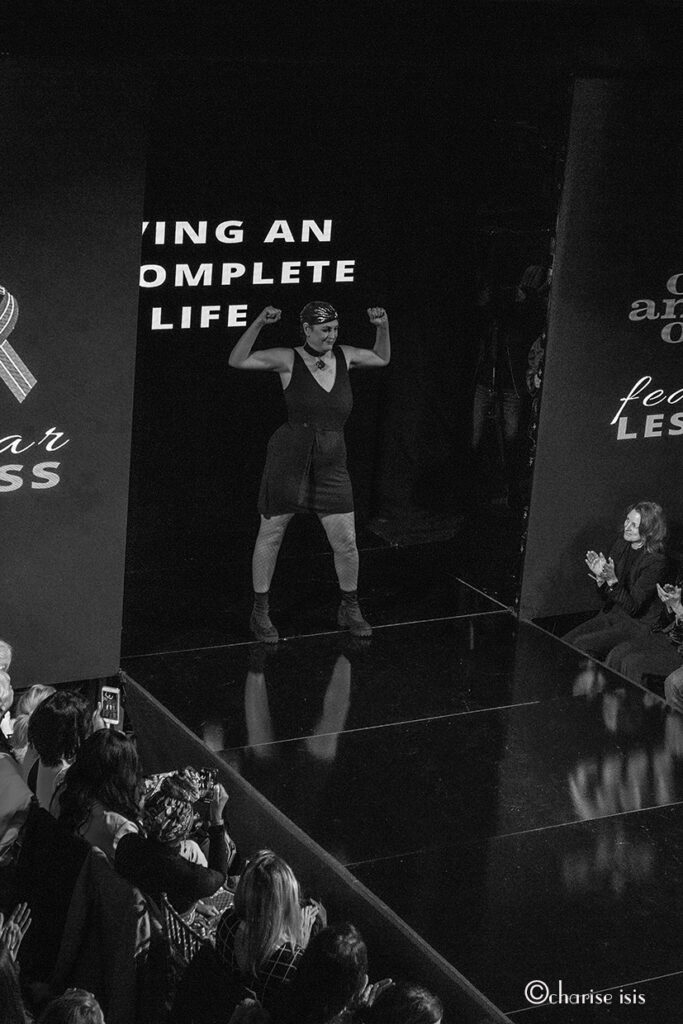 The strength of Katherine! 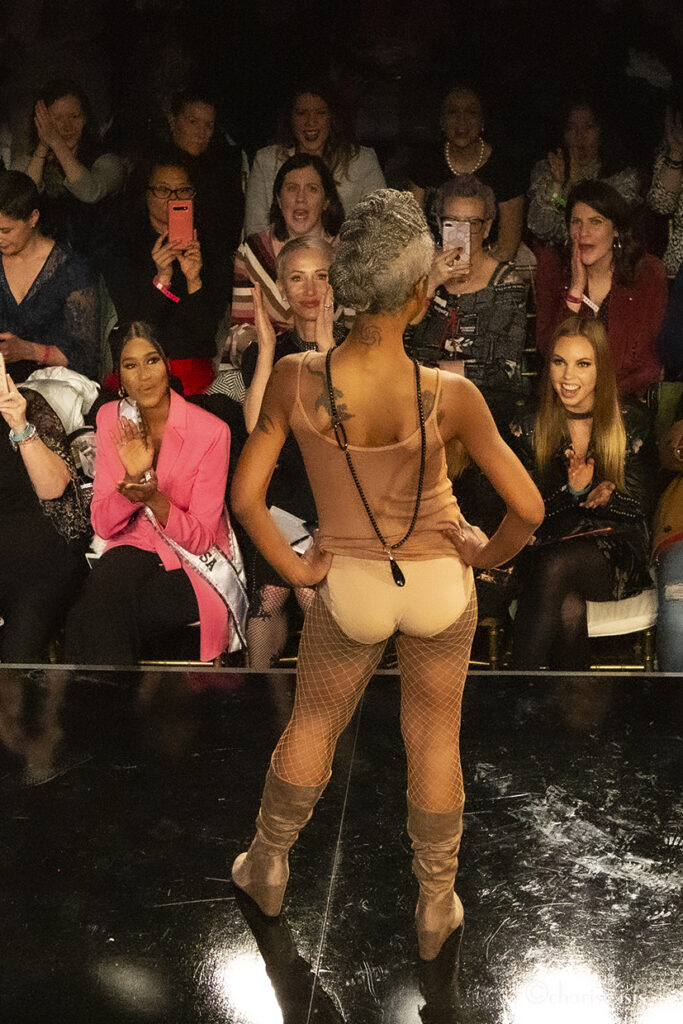 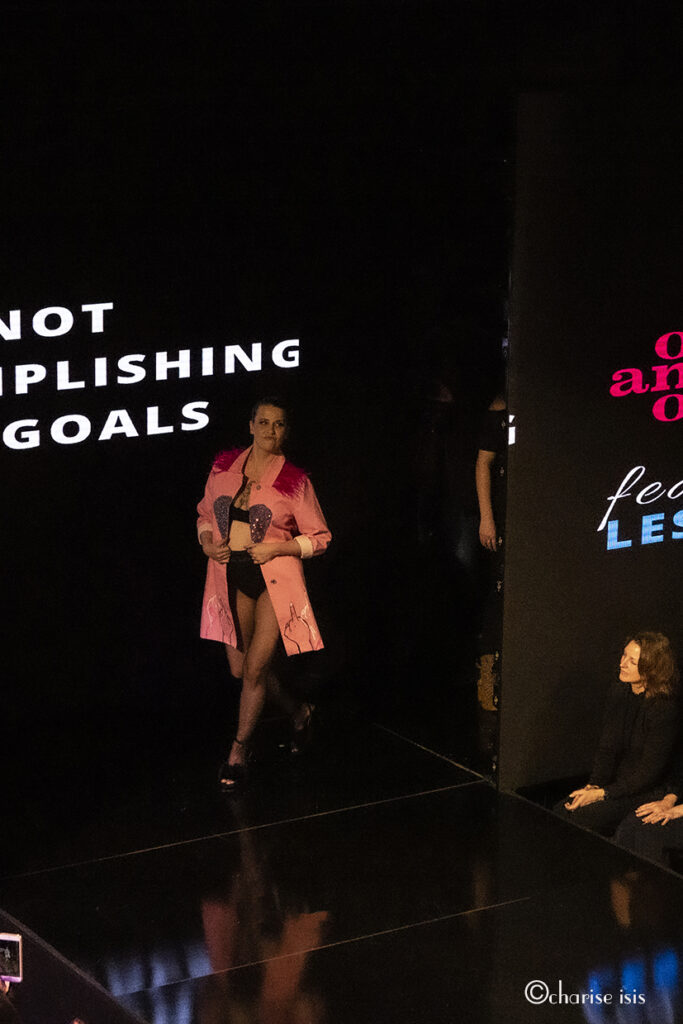 Rachel, she has the attitude and the heart! 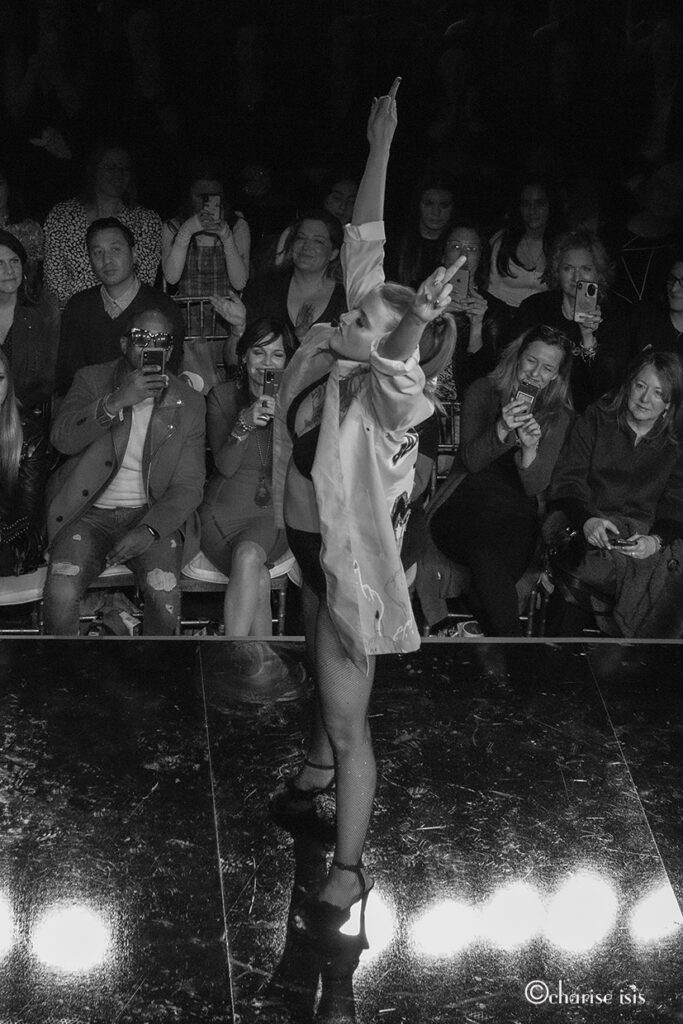 Rachel, flipping the bird to cancer! 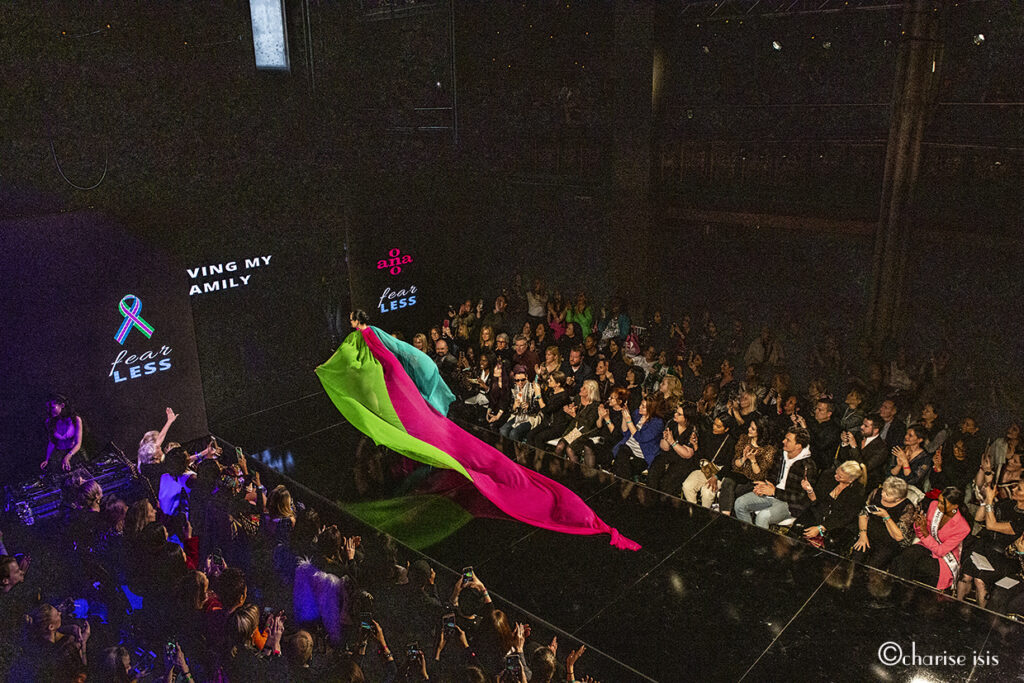 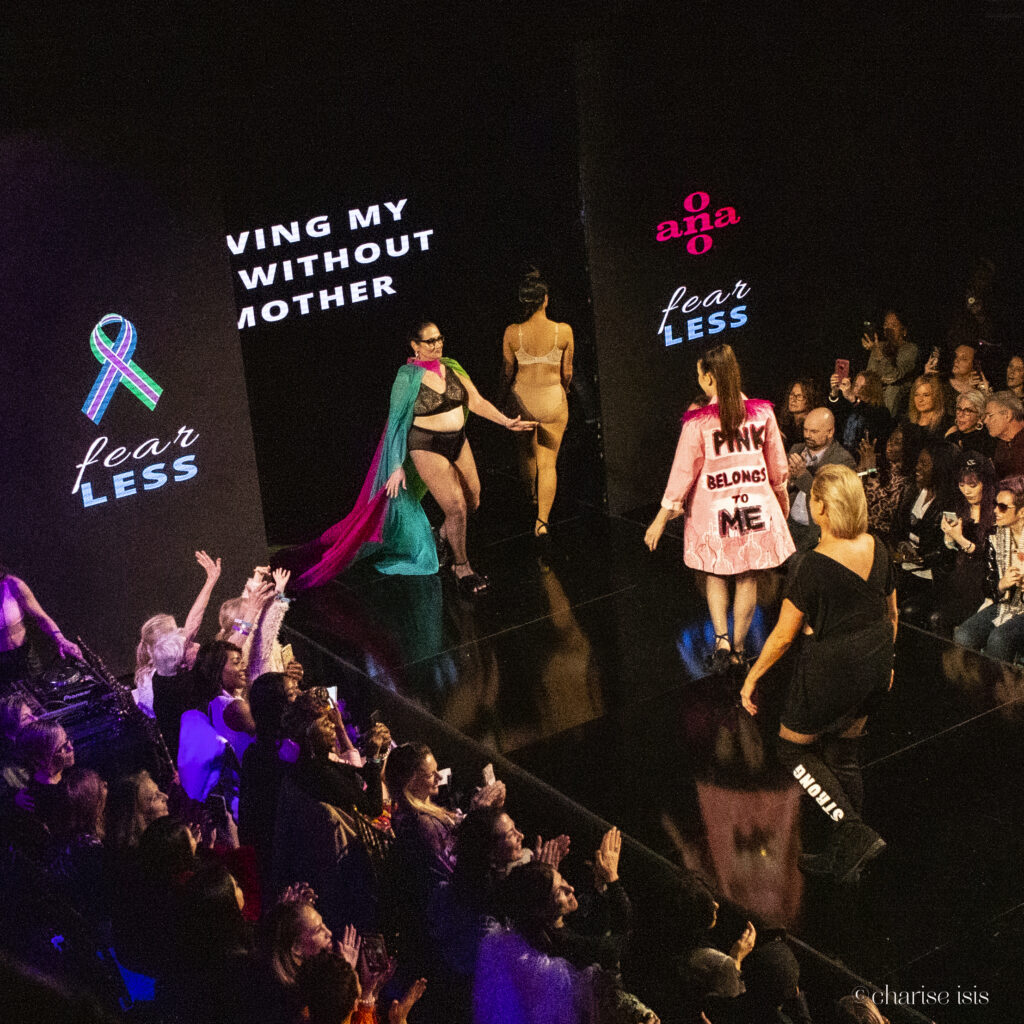 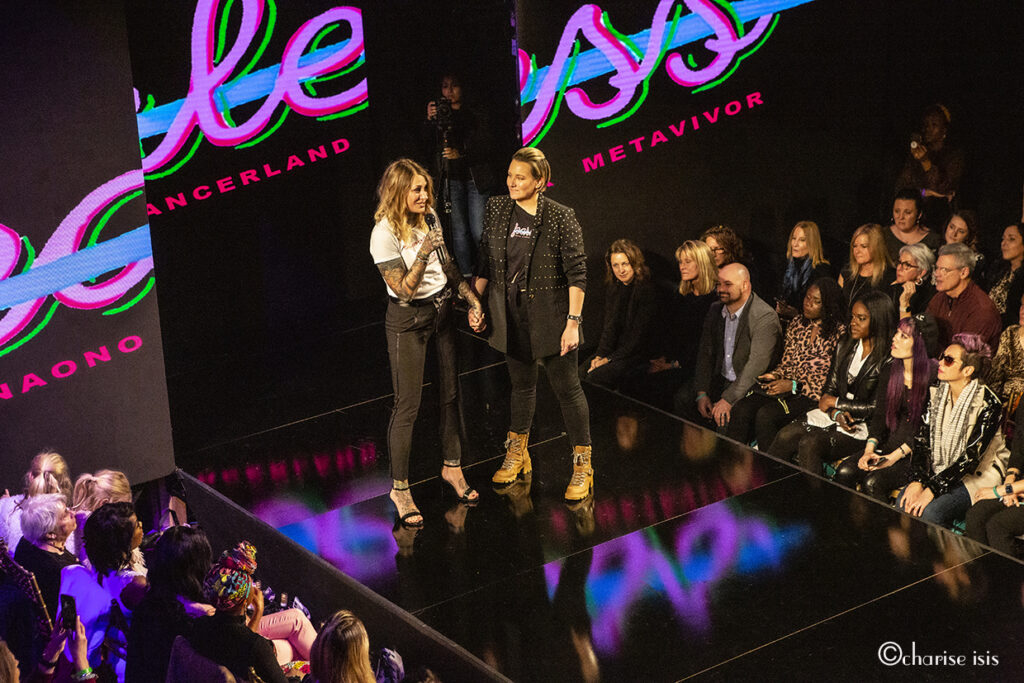 Beth and Dana… their hard work for 2020 NYFW has come to fruition. We are so grateful for these women! 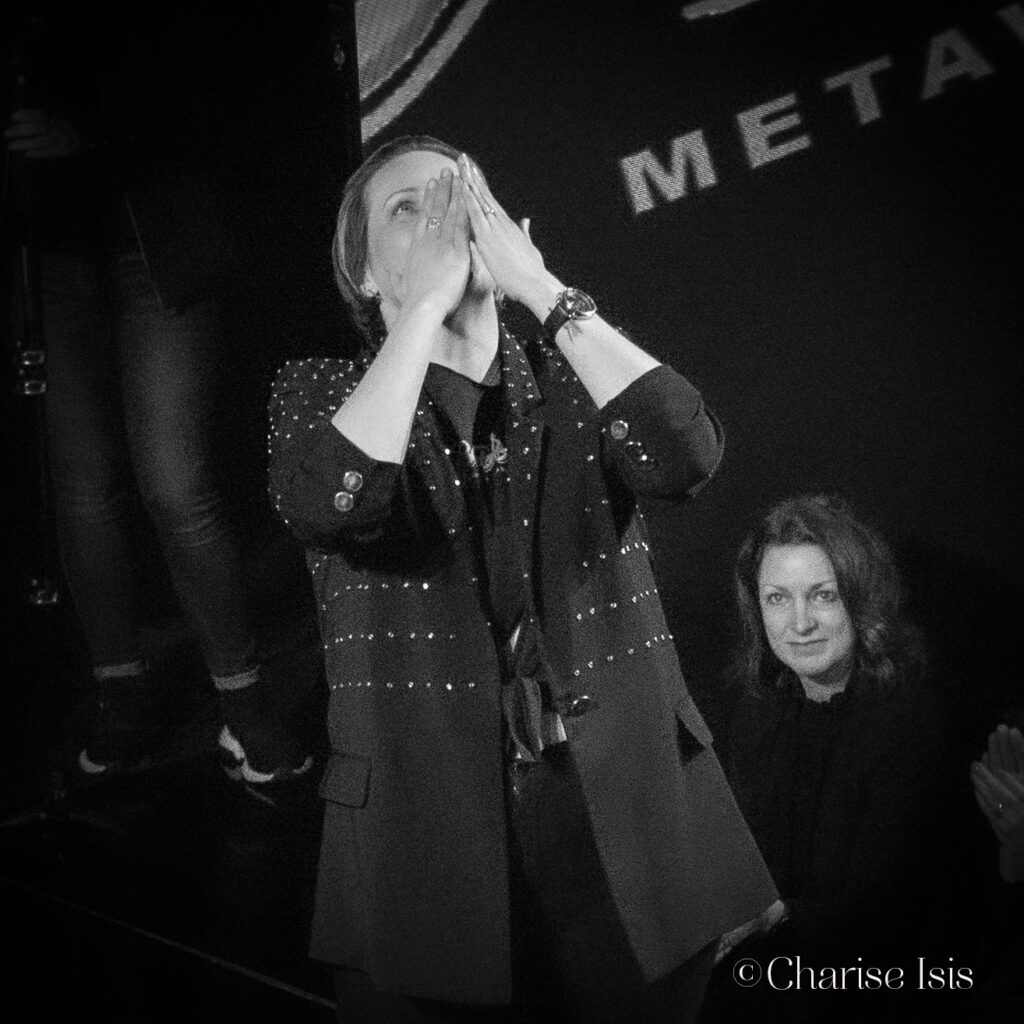 Dana, owner/designer of Ana Ono sends a kiss of gratitude to Champagne Joy. 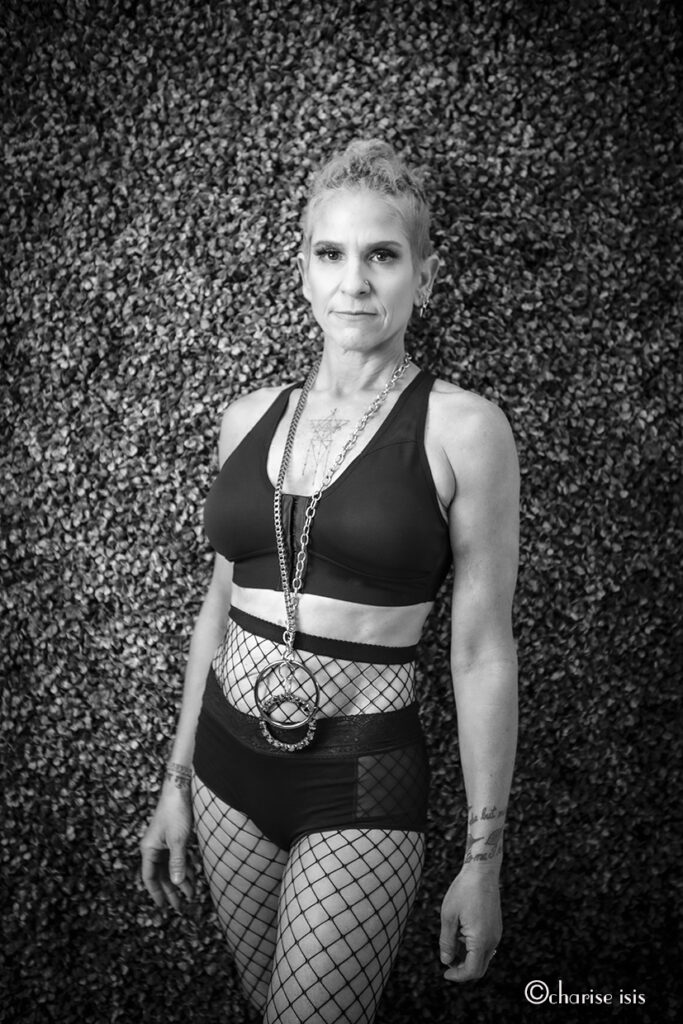 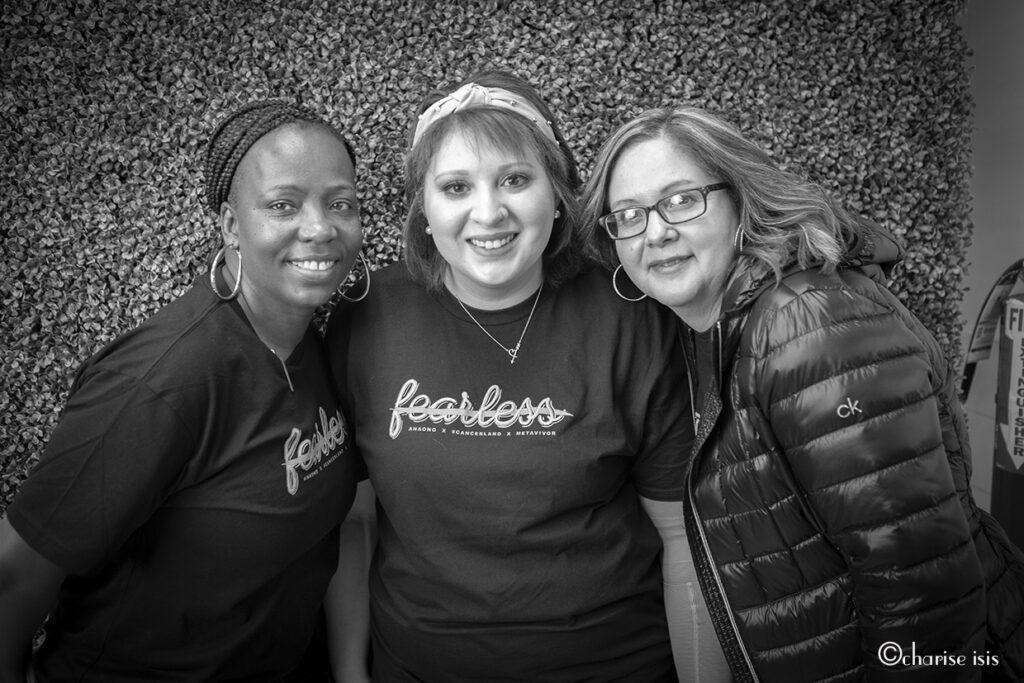 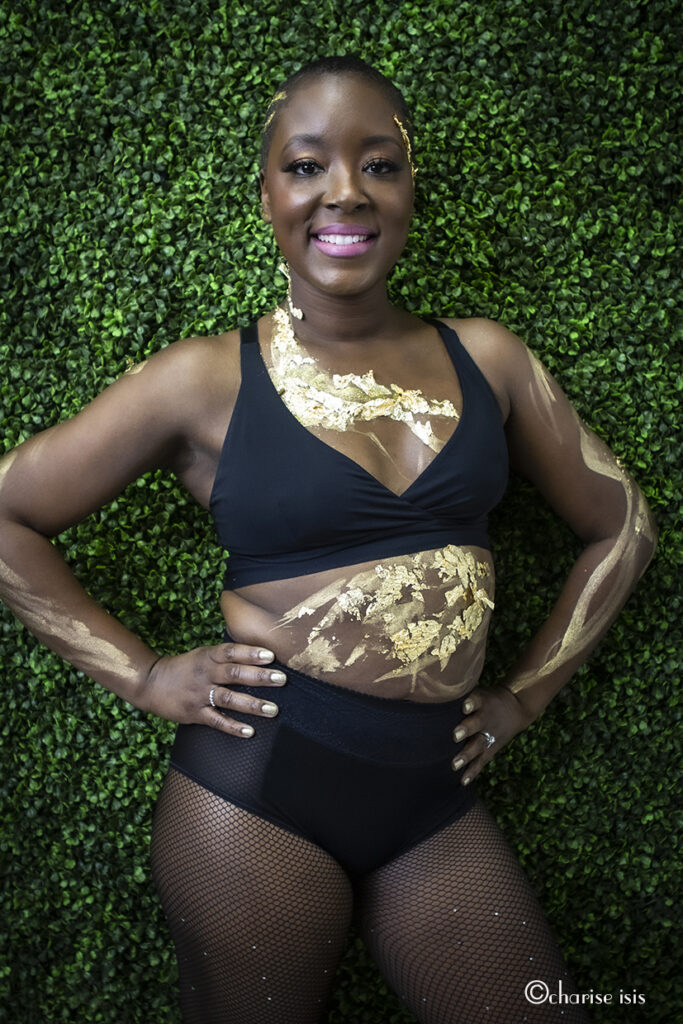 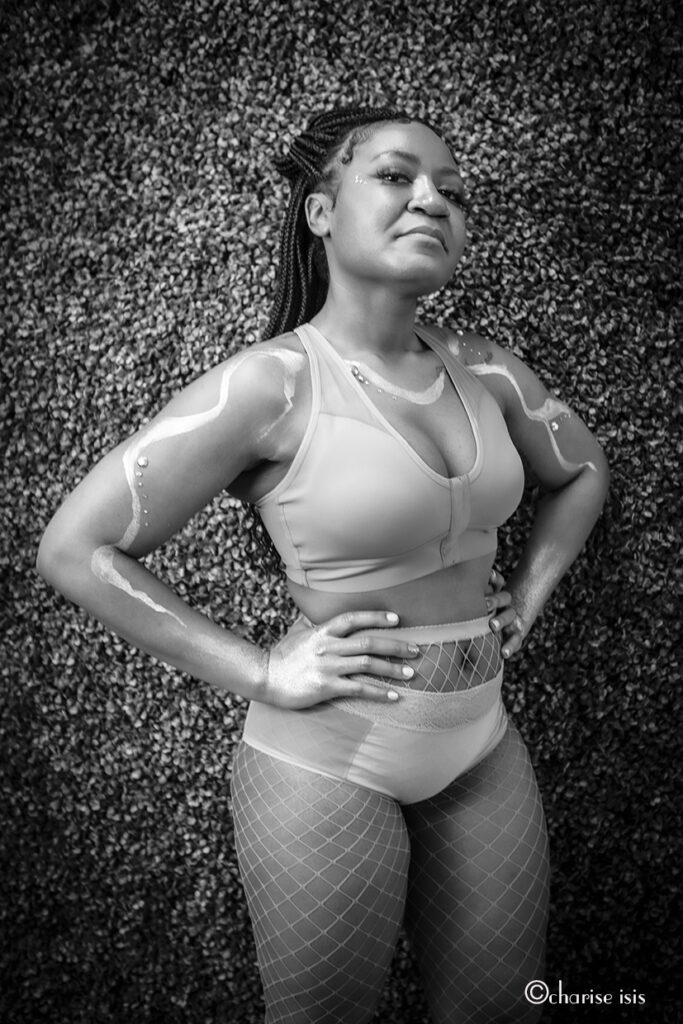 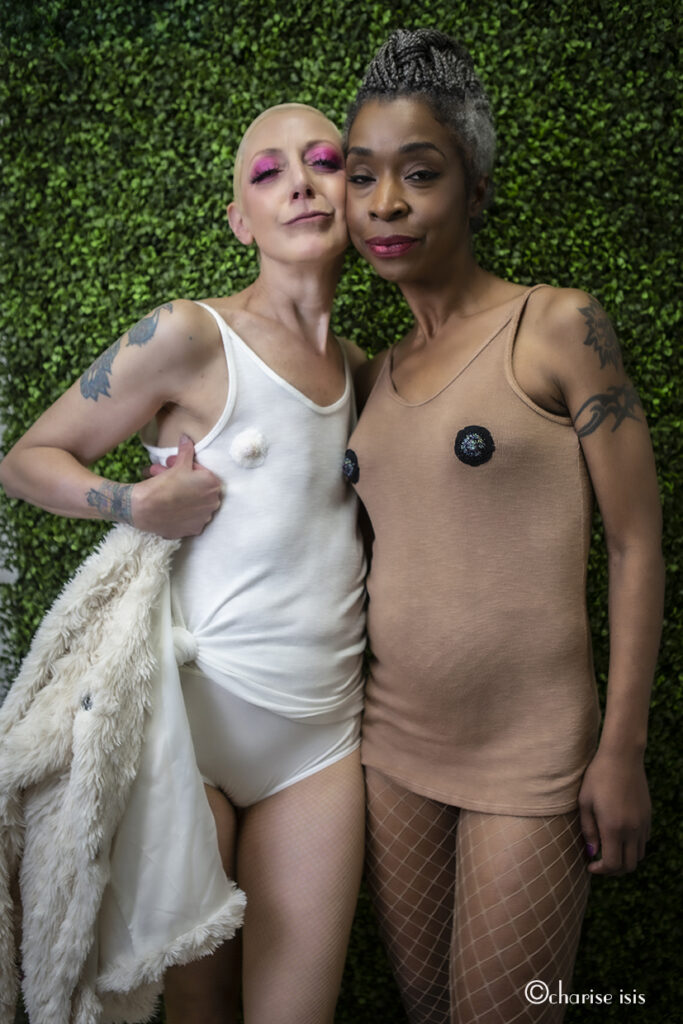 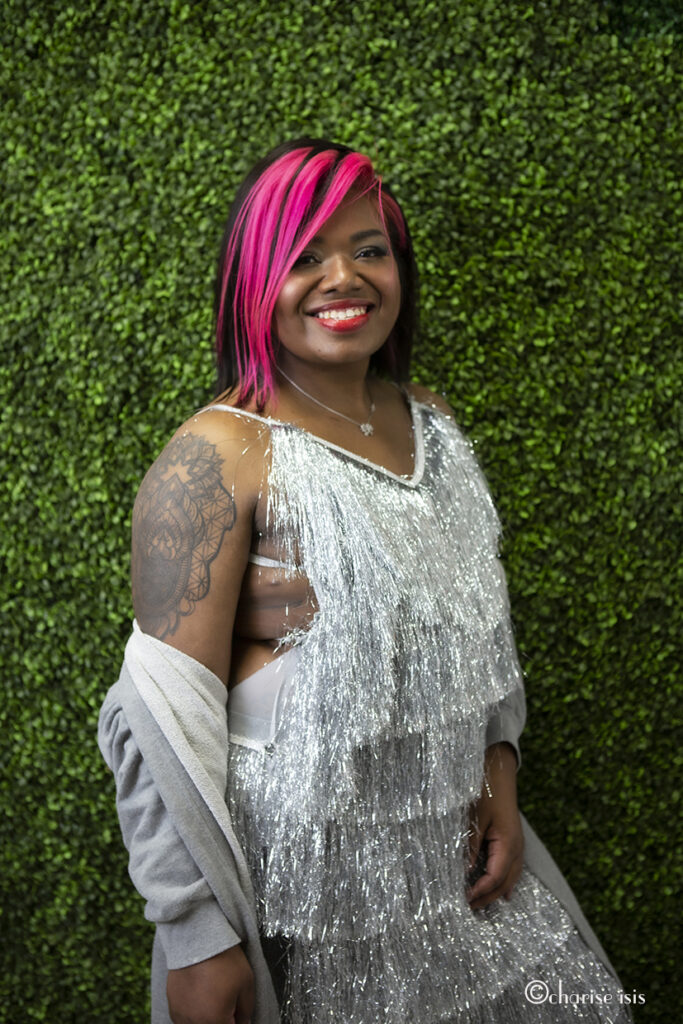 What did I tell you about Shay’s smile?! 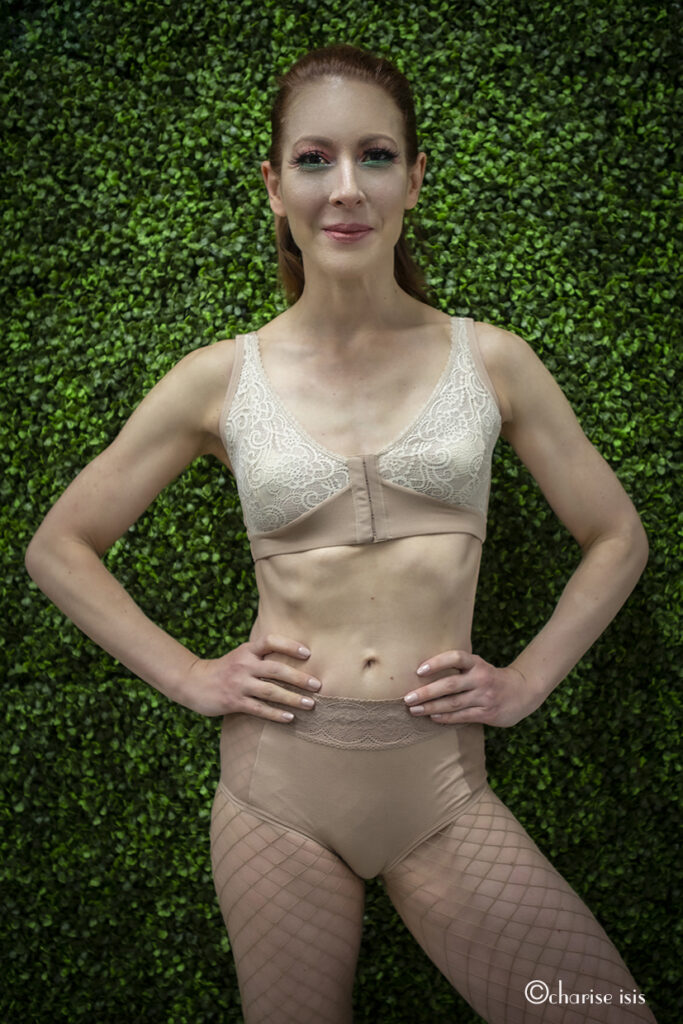