The Athena Division of the Grace Project is presenting a photography exhibition, artist reception, and a panel featuring active military and women veterans affected by breast cancer. These events will be held at The Military Women’s Memorial at Arlington National Cemetery.

CLICK HERE to find out more about the panel: 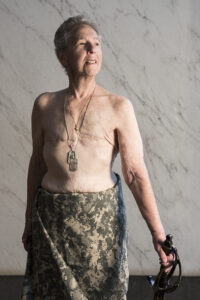 The Athena Division takes up arms with those enlisted in the battle against breast cancer and body image. True warriors, the subject of the photographs, are  United States Veterans and active military personnel, women (and some men) accustomed and trained for battle. According to a 2009 DoD study found that their service gave them a 20-40% increased risk of developing breast cancer.

Most of the subjects were photographed in the Hall of Honor at the Women in Military Service for America Memorial at Arlington National Cemetery we draped these brave women in the camouflage fabric of their service and armed them with ancient Hellenistic weaponry.  The portraits are based on Athena, the Goddess of courage and war, the results are powerful. The subjects of these portraits have disrobed revealing their scars, giving witness to true courage.

Through these images, stories are revealed of women who continued to work, serving their country right through chemo treatment or those who were forced to quit their jobs and leave their service due to botched surgeries.  Women who opted for prophylactic mastectomy for which they had to seek out on their own due to an increased genetic risk, that combined with potential toxic exposure could have proved fatal. Women who had never allowed themselves to feel anything about their cancer, or shed tears, until now, stuffing down feelings in order to keep up with their male cohorts. Women who had been abandoned emotionally by husbands, partners, family and friends that were unable to handle the the emotional weight of the C word.  Women left in the wake of cancer, struggling with the devastation that it leaves behind on their bodies and the collateral damage left on their hearts.

During the process of these portraits, tears were shed as the layers of stories unfolded. Pain that had been endured carried with them like a soldiers kit. Within the safety of their comrades in arms and in this magnificent setting, these women were able to lay their burden down for a moment in front of Charise’s camera and share with the world something rarely shared by a soldier… vulnerability.

CLICK HERE TO READ MORE ABOUT BREAST CANCER IN THE MILITARY

If you are a United States Veteran or active military personnel affected by breast cancer and would like to participate in this powerful chapter of the Grace project please fill out this form.  Our photographer Charise is located in Kingston New York, but does travel to photograph for the project.  There is no fee to participate but you will be required to sign a model release and share your scars.